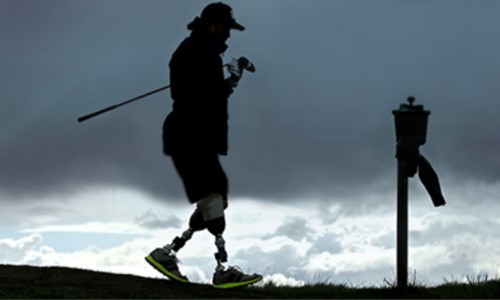 The On Course Foundation supports the recovery of wounded, injured and ill Service personnel and veterans through golf. Golf offers an opportunity where players of all skills and background can compete to improve not only physically, but to build mental strength to overcome adversity as well.

Following is an excerpt of a conversation with John Dodds, Executive Director of On Course Foundation.

Tell us about the mission of the On Course Foundation.

John Dodds (JD): The On Course Foundation was founded by John Simpson in 2010. John was diagnosed with polio as a child and has dealt with mobility issues his entire life. Despite the fact that John only has full use of one leg, he nevertheless became an avid golfer. He parlayed his love of golf into a successful career in sports management and has managed some of the top golfers in the world including Gregg Norman, Vijay Singh and Sir Nick Faldo.

When John visited a rehabilitation center at Headley Court in 2009 in his native England, he originally planned to speak about how he overcame the challenges of polio through the game of golf. During this visit, he was struck by the number of veterans who were learning to use prosthetic limbs. It quickly became apparent to John that golf - both the game and the broader industry - offered a great opportunity for these injured veterans to regain confidence and find employment, just as it did for him. Shortly thereafter, he organized a pilot event among some of these veterans and started the On Course Foundation the following year.

In 2012, we inaugurated the Simpson Cup, which is a Ryder Cup-style tournament of two teams, one from the US and one from the UK, each consisting of 13 injured veterans. The following year, the On Course Foundation USA was created to work with injured or sick veterans in the United States. Both foundations specialize in working with physically injured veterans as well as veterans with conditions such as PTSD.

How do sick or injured veterans benefit from exposure to golf?

JD: The impact on their lives has truly been profound. Golf gets them out of the house and allows them to mix with like-minded individuals. Not only that, playing golf helps build confidence and self-esteem, especially for those veterans adapting to prosthetic limbs. Many of them also gain an interest in working in the golf industry. In that case, the On Course Foundation leverages our relationships throughout the industry to find them in jobs.

We have placed numerous injured or sick veterans in jobs at golf clubs as well as at industry suppliers including Callaway and Taylormade. I regularly hear that the veterans we’ve referred for jobs are phenomenal employees. That makes sense, given the responsibilities and sacrifices these veterans undertook as members of the armed forces. They have a tremendous work ethic, and absolutely are great assets for any company. Funnily enough, the only complaint we ever get is: “they work too hard!”

How many states does the On Course Foundation USA operate in?

JD: We currently operate in 11 states, with huge ambitions to expand to even more. 2019 has already seen exciting expansions into Texas with more States being added in the near future.. When you consider the difficulties many veterans have when adapting to life when they return home, we feel there is a pressing need to offer our services to them.

Even though our presence in the United States is growing, I am happy to say that we can see where we are making real progress. A good example of this is Alex Happer. Alex’s father was a first responder on September 11th. Alex, who began playing golf at age four, was inspired by his father’s experience and turned down several golf scholarships in favor of joining the military after finishing high school. He served multiple tours in Iraq and was diagnosed with PTSD in 2016. Alex already possessed a love of golf, and so he joined up with the On Course Foundation, and we found him in a job in the golf industry. Earlier this year, he joined the Golf Staff at Trump National Doral Golf Club. While Alex’s story is inspiring, there are so many more veterans who we want to help get back on course with their lives.

Are there any fund raising initiatives you are excited about in addition to the program expansion?

JD: As we work to raise money, we have several initiatives that help support our mission. We have an upcoming auction around Christmas where people can bid on items and the proceeds go to the On Course Foundation USA. We’ve previously auctioned off a foursome at Maidstone Country Club. The money from that alone gave us the funds to hold a three-day event for around fifteen injured vets who have now started their journey with the Foundation.

We’re working with an awesome veteran-owned belt company called DogLeg Reaper. Great quality belts, and they’ve kindly agreed to donate proceeds to the On Course Foundation for any club we put forward. In addition to that we also have our club valet service in partnership with GolfStix Value Guide – they will convert unwanted golf clubs to cash donations to the On Course Foundation. Lost and found clubs or ex demos are great ways of making indirect donations to support our cause.

The On Course Foundation has been fortunate to receive support from individuals in the golf industry, too. David Leadbetter recently auctioned instruction opportunities. We’ve already had a great number of clubs get behind this program, along with some major club operators such as Toll Brothers, The Dormie Network and Billy Casper Golf. And, of course, we are hoping to expand our network of supportive clubs over the next few months.

We are trying to put some events together for next May, which is National Military Appreciation Month in the United States. We’re always looking for clubs to host our events, help us raise funds and, of course, to host our members for work experience and employment placements.

The On Course Foundation has a very noble goal. How has your partnership with Clubessential helped you advance your mission?

JD: As a non-profit, we can only spend what we earn. So the free services and support you offer us are a big help. Along with our limited funds we also have a small team of hard-working staff. The ease of updating our Clubessential website offers us big time savings and allows them to spend their time directly helping our members.

Before we used Clubessential, we struggled to find a good website partner. It’s important that both our branding and message be communicated clearly. Clubessential understands that completely. Your team nailed our branding, as it was apparent the first time we met to discuss website design ideas. From there, the service and support we receive has been a great help to us as we communicate to an expanding audience. It’s easy for us to update content on our website so as to announce dates of upcoming events, or when we have new fundraising initiatives.

Hear more from other leaders in the industry in an ebook: