Back by popular demand, the 2022 Clubessential Digital Summit 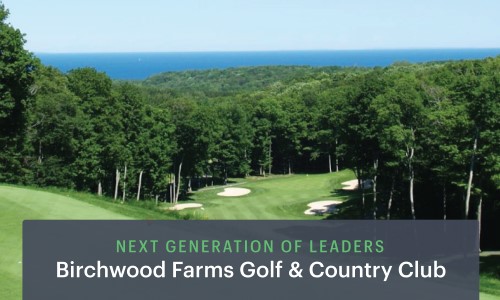 One thing that Stacey Wickham, Assistant Controller at Birchwood Farms Golf & Country Club in Harbor Springs, Michigan loves is the unpredictability of her role.

“There's such a variety of things that happen on a daily basis. It's never boring. That's the big thing,” she says. What she didn’t like however was the unpredictability of their payment processing and reconciliation.

“For example, for one day, we'd have 50 credit card charges; two of them would clear the next day, five of them were clear the following day. The rest of them would clear seven days later. There was no rhyme or reason.” Having decades of experience in the accounting field, but outside of the club industry, she knew there was a better way because she had done it before. “The previous jobs that I've held we were pretty advanced as far as the payment systems go. It felt a little like I was kind of taking a step back.”

Updating to CE Payments helped alleviate that feeling and bring her back to what she knew. “Now I feel like we're with the game,” she says.

That feeling of being behind is one she felt acutely at the end of the month. “It was hard to understand what their charges were. I would spend hours trying to reconcile the bank account at the end of the month. When I'm looking at the software and looking at what we deposited, I'd have to actually take multiple deposits that hit the bank at one time to try to go back and reconcile it. It reminded me of playing Tetris trying to get all these little blocks to fit into one deposit. In one of our busiest months, it took me four and a half hours to reconcile one bank account. Now with CE payments, it took 30 minutes. The way that it works in the background, everything that hits our bank account in two days is what it is appearing. The deposits match what the software says went to the bank. It's so simple. I just go through and check off the deposit and I'm done. Now it’s like playing Tetris with all squares – it just falls into place.”

Change is never easy, especially when you’re talking about money and finances – everyone has some level of emotional attachment to their process and their money. But there comes a time when you have to make a move. As Stacey remembers, “We were unhappy with the provider when I first came on board, and then they transferred over to another, which made it even worse. And this (CE Payments) came along. I was very nervous but I wanted to make a change because I'm the one who does the reconciliation and I was incredibly frustrated. I've been balancing bank accounts forever and it shouldn't have been as complicated as it was. So I kind of pushed for it. We put it off for a few months because it was so new and hoping to have any bugs worked out before we took it on. But the transition was really simple. Thomas just walked us right through it and answered all the questions that we needed. Simple. And now, the reconciliation at the end of the month is a breeze. That's what caused me so much headache. Trying to balance through our previous merchant provider the way that they did the deposit. It was a nightmare. Now it's brief.”

Getting the Rest of the Club On Board

The advantages of CE Payments aren’t limited to the back office and expand as they are integrated with operations throughout the club. “We just transitioned over to CE payments at our POS stations this month (January 2020). It seems to have the same smooth process. I haven't had one issue so far.”

As far as members adopting the system, it has been a process Stacey says, but that’s to be expected with any change. “Thomas had sent us emails to use as a template and letters to send to our members to explain the process of what they need to do. They could just go online and set up their payments if they hadn't already. We actually went in and reentered the majority of them where we had the information available. It wasn't terrible, but it took a little bit of time to do because we have 700-some members here. The fact that we haven't had any complaints about the new system tells me that everything is working just fine for them as well. Trust me, we would hear about it if there was a problem.”

The Gift of Time

Being in northern Michigan, Birchwood Farms Golf & Country club enjoys all four seasons. “Our summers are superb and our golf courses are second to none. And if you're ever on a road trip, Harbor Springs is definitely beautiful in the fall,” according to Stacey. “It's just unbelievable with all of the trees. And we enjoy a lot of winter sports.” With around 30% of the members being full-time residents, that results in downtime for some of the staff, but not for accounting. “Of course this (winter) is our busy time, but it gives us that ability to do those extra things that we need to do,” says Stacey. Now thanks to CE Payments, she can do more of that and enjoy her job, her time, and more of what Harbor Springs has to offer. “It's amazing. I couldn't even believe it when I got done with the bank rec this month. I’m very happy about that.”

Discover What Payments Could Do for You

Get an overview, download an infographic, or watch a webinar.

Hear What Other Next Generation Club Leaders Say

We interviewed club leaders from across the industry to understand how they are tackling the club industry's most challenging issues. Discover what they had to say in their own words.